The dinocyst calibration set has an extremely uneven distribution of sites along the sea-ice gradient. In the 1171-observation calibration set (the latest 1492-observation calibration set is not yet online), just over half the sites have zero sea-ice, so the remainder of the gradient has a low density of sites in comparison. This distribution of sites will bias estimates of transfer function uncertainty. Telford and Birks (2011) showed that sites in the well-sampled portions of the gradient have many potential analogues and so low cross-validation errors. The converse occurs in the poorly sampled portions of the gradient. However, because there are few sites in the poorly sampled portions, the average error is biased low. This bias is worst for the Modern Analogue Technique (MAT), less severe for weighted averaging, and least severe for maximum likelihood regression and calibration.

This bias may not be easy to avoid as the distribution of sites in the calibration set may reflect the underlying distribution of the environment, but it is important to explore the magnitude of the bias. This can be done by dividing the environmental gradient into segments, and calculating the uncertainty of cross-validated estimates in each segment (akin to the calculation of maximum bias).

The R code I used is here. 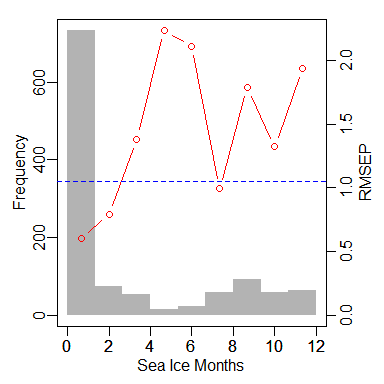 Histogram of the number of months with sea ice, and RMSEP (red) for each segment. The blue line shows the overall RMSEP.

One obvious tactic to deal with this problem is to remove some of the sites at the warm end of the gradient. All those sites in the Mediterranean Sea, for example, have zero sea ice and the cross-validation estimates are perfect. So these sites improve the apparent transfer function performance, but never provide any suitable analogues for sites near the sea-ice margin. Removing the 397 sites with a winter SST greater than 7°C, the overall RMSEP increases to 1.28 months. The distribution of sites is still severely uneven, but less than it was for the full dataset, so the bias in this uncertainty estimate is reduced, but it is still biased.

Ecologist with interests in quantitative methods and palaeoenvironments
View all posts by richard telford →
This entry was posted in transfer function and tagged dinocysts, sea ice reconstruction. Bookmark the permalink.