Tibetan tree-rings and the sun

Via Maarten Blaauw’s Club du Soleil, I’ve found another paper reporting evidence of solar variability in tree-rings from Tibet. The evidence in the first was dubious, is Duan and Zhang (2014) any better?

Readers familiar with this series critically evaluating palaeoecological evidence for solar effects on climate may already have guessed that this is not going to end well. But have patience.

Duan and Zhang generate a 449-year maximum late wood density (MXD) data from Balfour spruce in the southeastern Tibetan Plateau using standard dendroclimate techniques. They use this record to “to reveal the long-term relationship between solar activity and temperature change in the study area”. They are utterly convinced that signal is there.

The analysis of the solar relationship starts with a Pearson correlation between MXD and sunspot numbers: r =  0.193. This is statistically significant, but the r2 is only 0.037, so this is explaining a tiny proportion of the variance in MXD.

The analysis moves on to the obligatory spectral analysis. 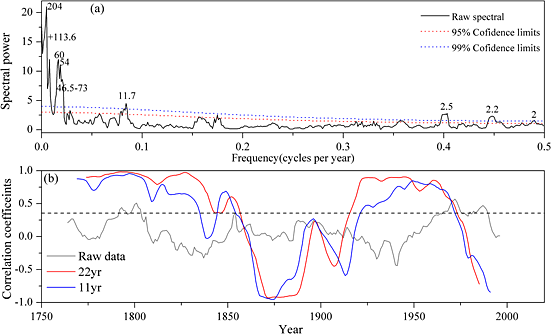 The multitaper spectral analysis finds a number of peaks that are significant (presumably against an AR(1) null hypothesis – which might not be full appropriate). The 11.7, 54 and 204 year cycles are claimed as solar variability. Since the time series is only 449 years long, there are only just over two 204-year cycles, so this peak corresponding to the de Vries cycle cannot be considered robust. The 54 year cycle is claimed as a fourth harmonic of the de Vries cycle – the first time I’ve seen anyone claiming to find this – looks like special pleading to me. The 11.7 year cycle matches the 11 year sunspot cycle fairly well, and I don’t blame the authors for getting excited. This result merits further investigation.

After the spectral analysis comes a running correlation. This is an analysis that is often done badly, but I have not seen it done worse than done here.  The 30 year running correlation of  MXD with sunspots is occasionally above the significance threshold used by Duan and Zhang, which appears to be the one-sided p = 0.05 level for 30 observations. There is no allowance for autocorrelation in the time series or for multiple testing. Duan and Zhang proceed to smooth both datasets with either a 11 or 22 year moving average and repeat the 30 year correlation. They believe the high correlations to be physically interesting, forgetting that they have induced a very strong autocorrelation and consequently have nearly no degrees of freedom available. The high correlations are an artefact of the smoothing rather than the importance of solar variability.

The paper reviews the literature for solar cycles in tree-rings. I would find the list more persuasive if I had not already discussed discussed some of the studies . It would be better still if the list was not inflated by papers reporting 14C variability in tree rings, which is of course entirely unrelated to any growth response trees might have to solar variability.

This paper offers at best weak evidence for the importance of solar variability, and many of the results are an artefact of the methods.

Duan and Zhang 2014. A 449 year warm season temperature reconstruction in the southeastern Tibetan Plateau and its relation to solar activity. Journal of Geophysical Research: Atmospheres

Ecologist with interests in quantitative methods and palaeoenvironments
View all posts by richard telford →
This entry was posted in climate, Peer reviewed literature, solar variability and tagged Duan and Zhang (2014), Tree-rings. Bookmark the permalink.

7 Responses to Tibetan tree-rings and the sun