…Apollo heard his prayer. He came down furious from the summits of Olympus, with his bow and his quiver upon his shoulder, and the arrows rattled on his back with the rage that trembled within him. He sat himself down away from the ships with a face as dark as night, and his silver bow rang death as he shot his arrow in the midst of them. First he smote their mules and their hounds, but presently he aimed his shafts at the people themselves, and all day long the pyres of the dead were burning.

The Iliad of Homer

Four centuries after Homer wrote of this terrible god, Apollo and the sun god Helios were recognised as one god. A new paper casts more light on this relationship, revealing that his arrows are UV radiation 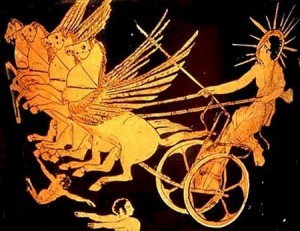 That’s not quite how Skjærvø et al, authors of “Solar activity at birth predicted infant survival and women’s fertility in historical Norway” describe how Apollo’s arrows join war, famine, pestilence and death in ending the lives of 17th-19th century Norwegians.

Skjærvø et al hypothesise that changes in survival and fertility were caused by enhanced ultraviolet radiation at the solar maxima which depleted the Norwegians mother’s folic acid reserves.

The link between folic acid deficiency and problems during pregnancy are well known. So far the hypothesis holds.

The link between UV radiation and folic acid depletion is established, but the doses received by some of the Australian participants in the study cited by Skjærvø et al (over 600 Joules UV radiation per day), suggest they were sunbathing. Nineteenth century Norway was not exactly a bikini culture: the doses received by the Australian sunbathers is likely to be much higher than the Norwegian mothers received.

The amount of UV radiation from the Sun varies between the solar maxima and minima. Lean (1989) report that at wavelengths of 250 nm, UV insolation is 5% higher at solar maxima. At wavelengths longer than 300 nm, the irradiance is less than 1% higher. UV radiation with wavelengths shorter than 280 nm (UVC) is absorbed by the atmosphere. This means that the doses of UVA (400 – 315 nm) and UVB (315 – 280 nm) are increasing by ~1% and ~3% from solar minima to solar maxima, respectively. I don’t know what the dose response curve is for folic acid degradation, but I would be surprised if a 3% difference in UV dose caused a disproportionate amount of folic acid degradation. The Australian study, for reference, had a more than three-fold difference between the lowest and highest dose received.

This 3% temporal variability can be put into context by looking at the geographical variability shown in maps provided by the EuroSun project.

Just across Norway, there is a ~50% difference in June UV irradiance. If a 3% difference in UV irradiance over the sunspot cycle could cause a significant reduction in life expectancy in western Norway, life should be almost impossible on the south coast of Norway! In winter, the sun is low in the sky and UV doses are very small (and there is minimal exposed skin to be irradiated).

In any case, the 3% difference in the Sun’s output of UV is small in comparison to the other determinant of UV irradiance at ground level – clouds. Data from the Norwegian meteorological office can give an idea of how variable cloud cover is from year to year in western Norway.

Clouds do not stop all UV. If we assume that an overcast sky blocks 75% of the UV (Kuchinke and Nunez 1998), then there should be about 40% more UV irradiance from a sky with mean of four octas of cloud (50% cover) than one with six octas. Year-on-year variability in UV irradiation due to cloud cover is about an order of magnitude larger than that due to solar variability.

Given the above, I am convinced that the mechanism proposed by Skjærvø et al is not plausible. I doubt any UV-based mechanism is plausible, and the relationship between the sunspot cycle and weather seems to be so weak that any weather mediated mechanism is also unlikely. I have two suggestions. The first is that some property of the data causes the statistical methods (which look good) to fail unexpectedly. The second is chance – one of the 5% of results that appear to be statistically significant at the p = 0.05 level when the null hypothesis is true.

This is yet another study of the impact of solar variability on palaeoecological data that I do not find credible.