The Sun’s apparent orbit is not an icosikaitetragon

The Sun appears to go around the Earth. Round that is, like a circle, not jumping every hour from one side to the next of a 24-sided polygon. Despite this, it is convenient to represent the Sun’s position in climate models as if it did behave like this. It is a simplification, and useful for models that are run over discrete time steps rather than continuously.

It turns out that there are good way and less good ways for calculating solar radiation across time steps. Zhou et al (2015) show that many of the CMIP5 climate models calculate solar radiation at time t and use this value of insolation until the next time step. For most of the models, the time steps in the radiation code are one hour long, but for one model they are three hours long. The effect of this procedure is to make make mean insolation vary with longitude, which it should not do. The problem is obviously greatest with the three hour time step, with a difference of 33W/m2 between maximum and minimum insolation, which not surprisingly causes some dynamical responses. With one hour time steps, the difference is about an order of magnitude smaller. 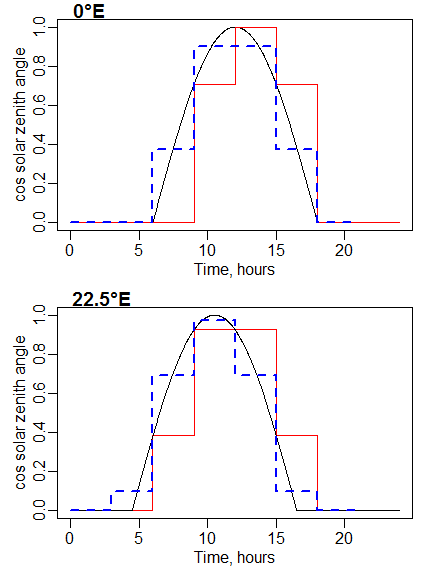 Anthony Watts gets very excited about this, describing it as “huge basic errors found in CMIP5 climate models“. He compares the 30W/m2 error with the 1.7 W/m2 forcing from the increase in CO2 concentrations since 1750.

This is characteristically silly:

Watts goes on to claim that models should be run at millimetre-scale resolution to capture turbulent flow properly, but that would take a supercomputer longer to run than the age of the Universe. This demand for impossible data is a classic denialist move.