The lure of underwater volcanoes

The release of the first data on global CO2 concentrations from the NASA’s Orbiting Carbon Observatory-2 (OCO-2) is giving these sceptics some excitement.

The distribution of CO2 over this six week period does not match the naïve expectations of the climate sceptics. Presumably they expected that if anthropogenic activity was responsible for CO2 increase, that the map would look more like Fig 2, which shows NO2 concentrations.

Fig 2. Global atmospheric NO2 concentrations based on 18 months of Envisat observations

So why the differences between the maps for NO2 and CO2? I can think of four interrelated reasons.

Second, related to the first, NO2 emissions are large relative to background atmospheric concentrations, so source regions are strongly highlighted.

Fourth, the CO2 map is based on 6 weeks of observations, the NO2 map on 18 months. This, together with the importance of natural fluxes, makes a huge difference. For example the plume over southern Africa has been linked to biomass burning. Burning of grassland can release much of the above-ground carbon as CO2 in a few minutes leading to high CO2 concentrations for a short period. Over the remainder of the year, the grassland is a net sink for CO2, and on an annual basis the carbon budget is approximately in balance. Fossil fuel burning will give a positive flux year round.

Together, these reasons explain why the map of CO2 concentration does not simply show human derived sources even those these are responsible for the long term trend in global CO2 concentrations.

Prediction: when 18 months of OCO-2 data are available, they will 1) show the most important source areas are those with high fossil fuel consumption or deforestation (with some up-welling ocean regions), 2) provoke fake climate sceptics into alleging malpractice.

Martin Hovland, previously best known by international climate sceptics for not renewing his AGU membership (but without stating what he objected to in the AGU statement on climate change), has written a piece for WUWT trying to explain the regional patterns in the OCO-2 data. He blames regionally elevated CO2 over the oceans on tectonic active regions, noting that there are high concentrations near the Emperor Seamounts, Fiji and Timor, all of which are tectonically or volcanically active regions than can be expected to be release CO2 or methane (subsequently oxidised to CO2) into the ocean.

This is rather daft for several reasons.

It is a post-hoc analysis. There are lots of tectonically active regions around the globe. Its not surprising that some are near some of high CO2 regions in the six weeks covered by the first OCO-2 data. A cherry-picked spatial correlation does not impress me.

There are no supporting data to show that the Emperor, Fiji and Timor are particularly active at the moment relative to any of the many other tectonically and volcanically active regions. Where are the seismic data, the temperature data or any other data set that could substantiate his conjecture?

Volcanoes emit relatively little CO2 relative to human sources – about two orders of magnitude less. This flux is fairly well constrained by the helium/CO2 ratio. For underwater geological to release enough gas to materially change regional atmospheric concentrations is inconsistent with what we know about this flux. 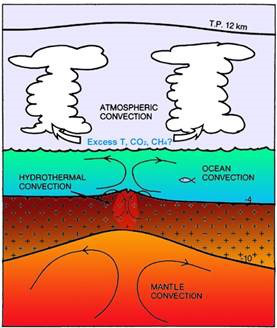 Fig. 3. Hovland’s caption: The original text to this conceptual drawing is: “Could there be a link between mantle convection and local ocean surface warming and hence atmospheric convection? A burst of mantle convection at a deep-ocean spreading centre would lead to an increased hydrothermal convection, which could lead to a sudden increase in local deep-water warming and upwelling. In turn, this could lead to local accumulation of warm surface water and a temperature gradient that would cause atmospheric convection. T.P.=Tropopause.” (Hovland and Judd, 1988). In the current context, this illustration is also relevant for gases originating on the seafloor and most probably feeding into the above atmospheric column.

This is nonsense. There is a large temperature difference between the ocean floor and the ocean surface. Vast amounts of energy would be required to heat the ocean enough to induce the circulation envisaged by Hovland. That energy simply isn’t there. Plumes of geothermally heated water rise a few hundred metres in to the ocean (perhaps a thousand metres), and can be tracked by He isotopes. Even large plumes have a temperature anomaly of only ~0.1 °C.  They would need far more energy to rise to the surface to release CO2 (and enormously more energy to affect atmospheric circulation. Hovland’s claims simply are not plausible.

In a few weeks time, NASA will release the next map of CO2 concentrations. It is likely that the high CO2 regions will have shifted. Will Hovland conclude that different tectonic regions are active?

Ecologist with interests in quantitative methods and palaeoenvironments
View all posts by richard telford →
This entry was posted in Fake climate sceptics, Silliness, WUWT and tagged martin Hovland, OCO-2. Bookmark the permalink.

17 Responses to The lure of underwater volcanoes